There has never been a book about our region’s twist-filled sports legacy quite like Budd Bailey’s Today in Buffalo Sports History: 366 Days of Milestones. Savor the special moments – one day at a time. In our effort to give readers a behind-the-scenes peek at the birth of regional books, Budd has shared some insights with us.

Q. Why did you decide to write the book?

A. I had written a daily series on what had happened in Buffalo sports history for The Buffalo News during the course of two years. I realized at the end of that series that I had collected a great deal of information on the subject that did not make the series. Based on the reaction the newspaper articles had received, I knew it would be interesting to people. It was just a matter of finding the right format. When publisher Brian Meyer suggested a book, I became quite excited about the possibilities.


Q. How did you go about researching the topic?

A. I obviously started with the record books of the local teams – Bills, Sabres, Braves, Bisons, Bandits, local colleges, etc. Then my imagination went to work. I looked up people who were inducted into the Greater Buffalo Sports Hall of Fame. I’d be reminded some of some obscure fact or incident, and head for the computer search.


Sports books were obviously helpful, and not just the ones that have been locally produced. I was reading a book on baseball anti-trust law and discovered that Hal Chase had sued to get out of his contract with the Chicago White Sox in order to jump to the Buffalo team in the Federal League in 1914. It was the first time a baseball player had ever used anti-trust grounds to try to win his contractual freedom. That made it historically significant, and thus worth a note in the book.


Q. What were a couple of the most interesting facts that you unearthed?


A. It’s tough to start with a couple. My favorites are the obscure but important stories that came up. The reserve clause allowed baseball teams to maintain the rights to its players forever, and thus was the most important part of the relationship between owners and players for more than 85 years. The National League added it to its bylaws during a meeting in Buffalo in 1879. 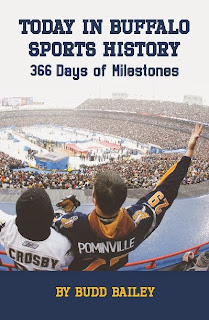 Q. What has the reaction to the book been like?


A. When most people see the title, they probably think this is simply a recap of the famous moments in the area’s sports history. It is that, of course. But they seem to be surprised about how every sport is covered, including such topics as boxing, bowling, track and tennis.


Here’s an example of the reaction: Someone attended an exhibition baseball game in 1963 between the International League All-Stars and the New York Yankees in War Memorial Stadium. He didn’t have many memories of the specifics, and thus was delighted when I had an entry about the game – including the score and its participants.

Posted by Buffalo Books at 1:16 PM