Looking Back on a Century of Screams

For generations, summers in Western New York were highlighted by visits to Crystal Beach.

As part of our continuing effort to share with readers insights into the origins of our growing line of regional books, we chat with author William E. Kae about "Crystal Beach Park: A Century of Screams." 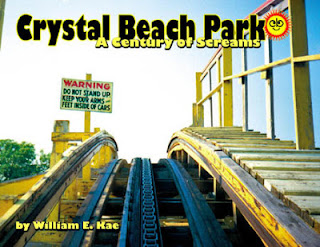 Q: Why did you decide to write Crystal Beach Park – A Century of Screams?
A: I didn’t intend to write any books. I was living in Tampa, Florida during the 1990s and I was passing through a town called Crystal Beach on the Gulf Coast just north of St. Petersburg. For the hell of it, I stopped in at their small library to find out of there was any information about the town c started or got its name. Turned out it was also founded by John Rebstock who founded Crystal Beach, Ontario. On subsequent vacations back to Buffalo I began combing through 1880s newspapers on microfilm at the Buffalo and Erie County Public Library to learn more about Rebstock and the early years of Crystal Beach Park just to satisfy my own curiosity. Then it just snowballed.

Since each book is on a different aspect of Crystal Beach History, the research was complicated and ranged from searching through archival records of Great Lakes Maritime institutions, patent office records, archives of ride manufacturers, interviews with surviving members of the musicians that entertained at the park, amusement industry trade journals… its endless.

Q: What chapter/section of the book would you label your personal favorite? Why?
A: I do not have a particular favorite chapter, however, I think I found development of the sites plans that illustrate how the park physically evolved with the positioning of the rides interesting. In a transcendental way, they capture the century of Crystal Beach Park history without words.
Check out "Crystal Beach Park: A Century of Screams" at www.buffalobooks.com .
Posted by Buffalo Books at 4:07 AM